Laughing so much tears are streaming down my face, as I watch Loc attempt to get into his brand new ‘hulk/shrek’ coloured nylon sleeping sack, purchased when all attempts to describe cotton sheets failed. Pulling it up over his head gives it a slight Mother Teresa slant, causing me to laugh even harder…ah the delights of cheap Indian guest houses…I sensibly have my katmandu silk inner liner, for India, one of the best things in my pack…and a cool blue colour (ok off original colour scheme but NOT parrot green!!!)

A week in Hampi was never the plan, but an overnight train to Bangalore was, and the only free seats in first sleeper were Thursday, so here we have been for a few days, with a fair few to go, taking things slowly, meandering through ruins of temples, along the river, beside rice paddies, lunching at the mango tree restaurant with a view of the water buffalo herd, watching spectacular sunsets, eating spicy thalis and waiting for the power to go back on for our morning espresso, all most civilised, chilled and cheap as chips…

One of the other highlights for me has been getting close to Lakshmi the teenage temple elephant, who is without a doubt, the cutest thing in Hampi (and no Loc doesn’t even come close, particularly in his new sleeping bag). There is something mesmerising about an elephant, I watched her getting her temple make-up, calmly letting everyone close, and every now and then swiping off a bit of a pink dot that perhaps wasn’t to her liking; pink is so last season.

The extent of the civilisation that was settled in Hampi just under 500 years ago is difficult to grasp, and the landscape is bewitching; orange boulders balanced precariously, slabs of rock with temples perched on top, all built from skilful placement of stone next to stone in similar fashion to machu picchu, with a river running straight through the middle, and coracle boats; a little like the teacup ride at disneyland, to take you across: 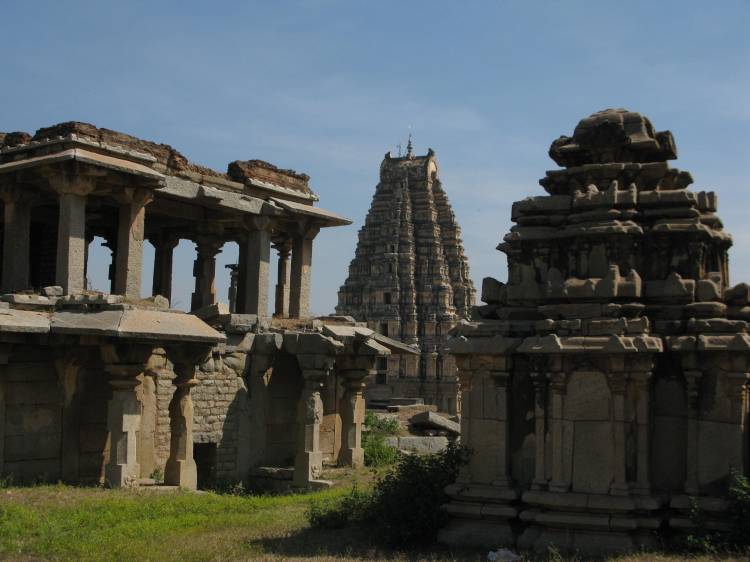 royal palaces, huge chariot roads that reminded me a little of Pompei’s paving stone Roman roads, an elephant stable that used to house just a few of the hundreds that were part of the army, and long pillared approaches to the major temple areas, huge rectangular deep pools surrounded by steps:

and so much history that bits of 13th century sculpture is often just propped up randomly near very much alive holy cows:

Monkeys are all around, and fun to watch, the way they climb up the rocks and temples is astounding, a little group sit together on the main temple in the early morning, and they all come out again to play at dusk. 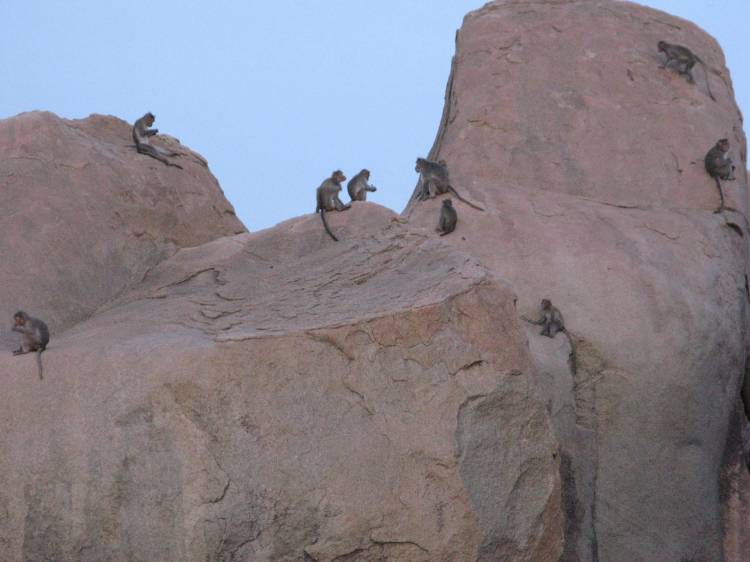 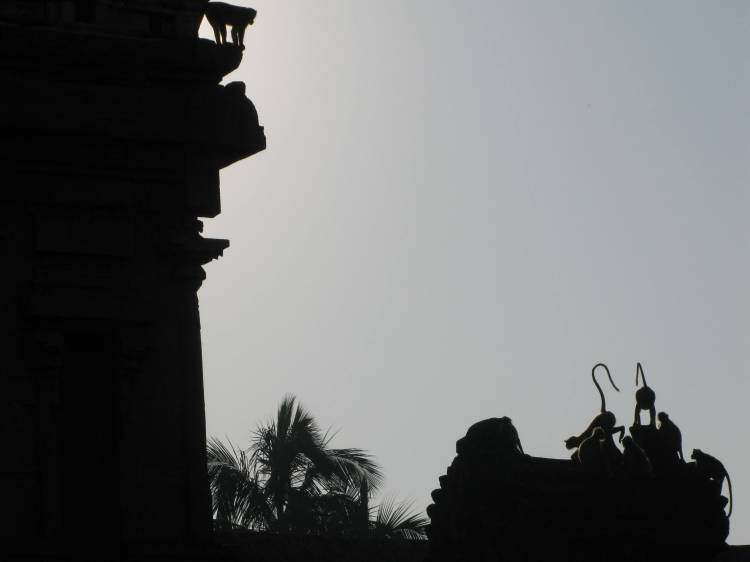 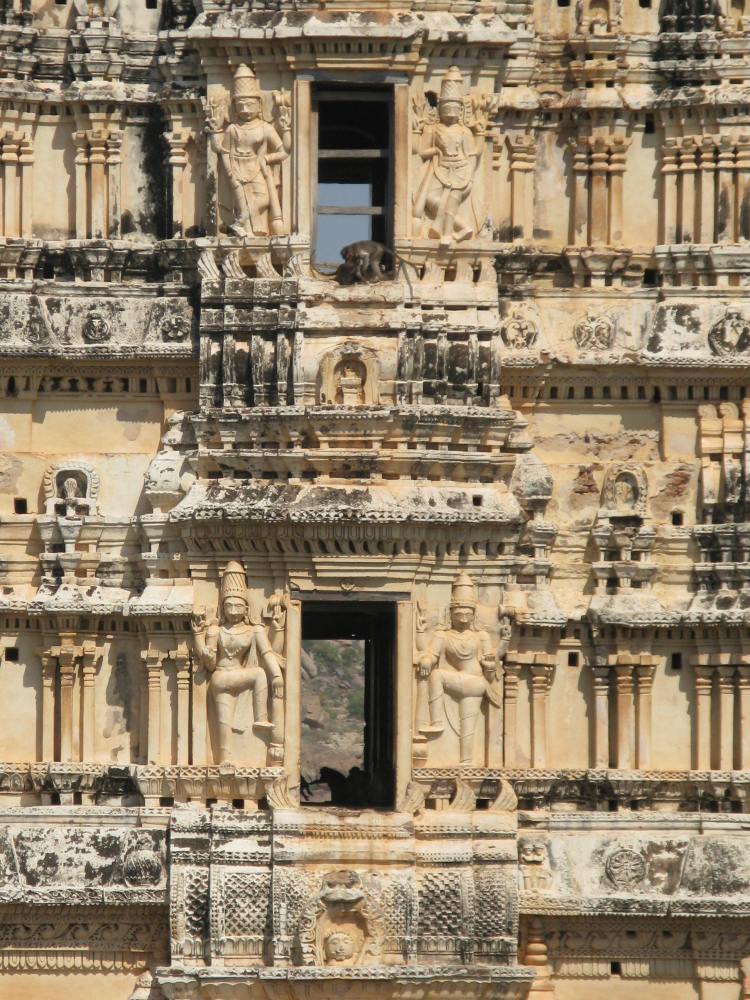 The site is UNESCO heritage, and a big effort has been made to restore the major sites, but there are still so many that need rescuing, again parellels to Herculaneum perhaps, and these things do take time. Lots of locals are living in the ruins, a police station has been built into the lead up to one of the temples and recently part of the bazaar was bulldozed, challenging times, how do you move a family with no running water, a few goats and a sari swing from a tree, even if where they are sheltering is listed…?

Reading lots and often and definitely caving into the e-book for birthday idea, purely from a weight perspective, still love the thrill of the swap in guest houses though…just swapped a dodgy crime novel for a re-read of Holy Cow. 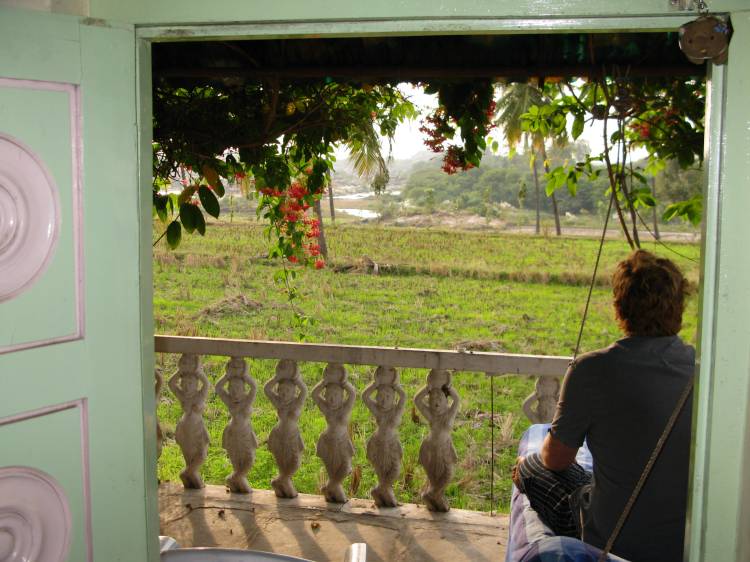 We’re now across the river on ‘Hampi island’ which is not an island just the other side, with a spectacular view and sunsets.

Today’s boat trip back across, reminded me of reasons we are no long hippie backpackers, Loc and I had a similar smirked reaction (delayed and kept to ourselves of course) to the group asking us if we knew where the giant teepee was, as they were planning to stay there with all the other travellers…