My last visit to Turkey was on New Year’s Eve in the year 2000. I’d decided to give up alcohol for a month, was pestered to buy an overpriced carpet, and narrowly avoided a bomb going off in Taksim by a few hours; literally by not liking the vibe, and asking the taxi to return to Sultanahmet to see in the New Year. So I had mixed feelings about returning.

I will focus on Cappadocia and Pamukkale in this post, and let photos do a lot of the talking as it was just so breathtakingly beautiful, and we had photographer’s lighting in both, stunning at dusk when mountains and limestone turned pink and orange as you watched. 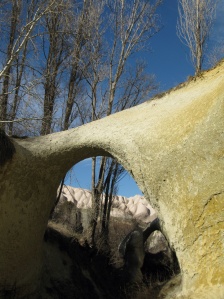 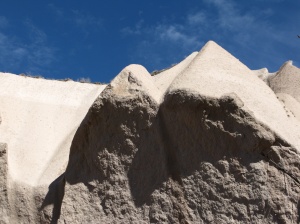 The treks around Cappadocia were empty in off season, we experienced pure silence, and the call to prayer inside a ravine, both experiences hauntingly memorable. The vivid blue against the white of the cliffs and edges of the gorge, combined with glistening silver birches, small streams filled with freezing water from snow capped mountains and intriguing pigeon caves cut out of the rock face was a visual feast. Goreme in the midst of the mountains was a perfect base for our three days and we discovered pide was a rather delicious lunch option, after the best breakfast table view in a while. 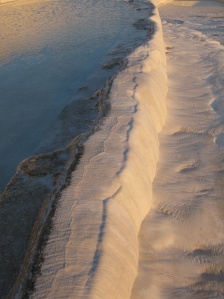 After a visit to Ephesus which I will cover in my next blog, we took a local train through pretty countryside to Denizli and then a little Dolmus minibus up to the village near Pamukkale. The sheer scale of the limestone cliffs and deposits blew me away, almost over the mountain as it was a breezy evening. I also had not realised that the ancient city of Hierapolis was directly behind it on the plateau and hill, oh wow. Although you can’t actually sit in the springs anymore, you can dip your feet in, and as 2 degrees and Turkish breakfasts for a week don’t lend themselves to bikinis I was more than happy. The sunset light hitting the white lime deposits gave everything a milky and in some cases glittering pink glow; magical. Turkey had completely won me over.